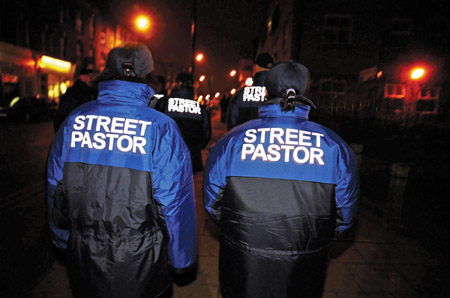 Motivated by our Christian faith and operating under the local umbrella of Churches Together in Daventry and regulated by the nationally-based Ascension Trust, Daventry Street Pastors are out and about the town most Friday nights from 8.00 pm until about midnight ready to help and provide a listening ear.  Since our first patrol in September 2009, some of the situations to which we have responded include assisting very intoxicated teenagers get home safely, calming tense situations, comforting the bereaved, responding to people who have asked for prayer and removing bottles and other objects that had the potential of being used as weapons.

Our Street Pastors are all volunteers and come from churches in Daventry and Long Buckby.  They are supported by a management committee and on patrol nights by other volunteers at a night-base where they receive refreshment and encouragement.

Street Pastors began in London in 2003 with the initial vision to reach young men and bring positive influences.  It was hoped they might be drawn away from gang culture.

There are now more than 200 Street Pastors groups in the UK with others abroad.  Patrols take place on Friday and Saturday nights in cities as well as rural towns like Daventry.