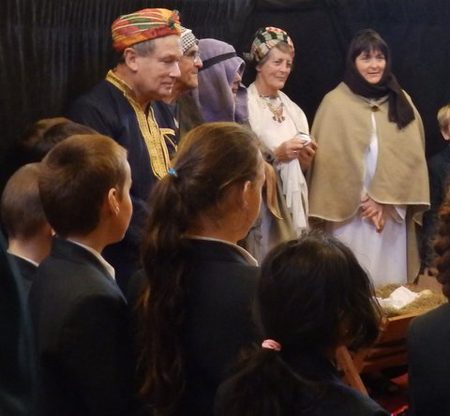 Starting in December 2014, Churches Together in Daventry present the Christmas story to Year 4 students from local junior schools.  Each time over 200 children and their teachers visit Daventry Methodist Church where the event is hosted.  The story unfolds as the children meet Mary, the innkeeper, shepherds and a wise man who give personal accounts of the most momentous time in their lives and its deep meaning for them and everyone.  While hearing the story in small groups, the children are encouraged to ask questions to gain a better understanding.  Local ministers and lay people took part in presenting the story.

The schoolchildren are given tokens to remember what they had seen – an wooden angel, some straw from the manger, a lamb and a star.  They, in turn, bring a gift to the crib for a modern poor mother and baby (St Andrews Church Welton Baby Project) and sing a carol.  It was a moving experience for all involved both young and old.  The gifts for the baby project were overwhelming in 2017 as can be seen in the photo below.

This year the same story was shared at the annual District Scouts' Carol Service in the same setting of Mary's house, the inn and the shepherds' hillside.

All involved as visitors or CTiD volunteers were reminded that the real Christmas was about a gift from God to help each one of us, encouraging us to know the Giver, as well as the joy of giving.

This Interactive Christmas follows the earlier successes when Churches Together in Daventry presented the events and the meaning of the Easter story as well as the Christmas story each year. 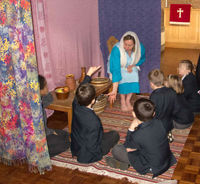 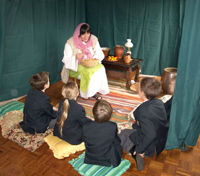 The innkeeper explains
her involvement 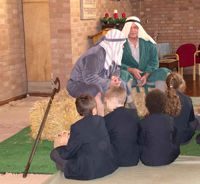 The shepherds, too, have a story

The Wise Man explains why he came to Bethlehem